Christmas in Edgartown was lots of fun. The streets (well, Main Street and North Water!) were packed with so many people it would have done an August day proud.

The parade was lead by a group of young girls dancing to “Jingle Bell Rock” and closed by, of course, Santa. Actually, there were two Santas – one on the fire truck, one in a Smart Car that had been tripped out with bright red “sleigh” sides. Not sure which Santa was the helper, but they both were great.

And now, as we launch into a new season, it’s time for me to take a break from blog-writing and get back to making stuff up. 🙂

I hope your holidays are wonderful – and here’s to the best New Year for all! 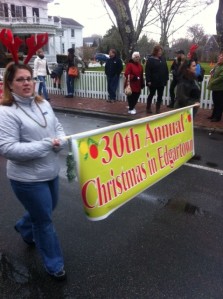 Even the Coast Guard had a float!

1st Place winner for the best float – Edgartown Lighthouse sponsored by my favorite pub, The Newes from America! 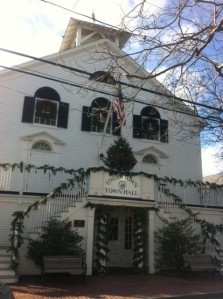 The halls of the Town Hall were decked out, too!