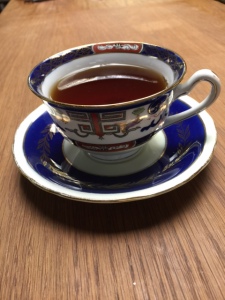 The shock is beginning to set in. After next Sunday night, the wonderful PBS series Downton Abbey will be history. Done. Only to be viewed again in . . . re-runs.

The building on North Water Street officially closes next Saturday—coincidentally, the day before the final episode of DA airs—as it begins its move to a magnificent, new facility. In preparation for the last hurrah of both DA and the equally beloved library, a screening of the show’s finale was in order, to be followed by High Tea.

Given the tight quarters in the basement of the old place, seating would be limited. The sign outside declared that the event was “Sold Out,” though the price of admission was merely enthusiasm and early registration. About 20 folks scored a “ticket.”

A decked-out gentleman greeted us at the door and presented himself as “Foster, the Butler.”

Women comprised most of the audience. There were a few hats, and I noticed that at least one lady was wearing elbow-length gloves. The room was abuzz with conjectures: would Mary run off with Tom, the former chauffeur? Would Robert drop dead? Would Marigold ever seem happy to be there?

The lights dimmed; the fish tank was unplugged, eliminating both a fluorescent glow and the drone of its filter; our hostess appeared. Good grief, it was Mrs. Patmore! Or was it? Dark hair, not blonde, peeked from beneath her cap. Her apron was cleaner and crisper than Mrs. P.’s. And when she spoke a few words of welcome, she sounded suspiciously like Virginia Munro, who is known to have choreographed more than a few terrific events in the basement.

No matter. We chose to believe that, indeed, it was Mrs. P., not Virginia. Whoever she was, she pushed a button and . . . ahhh . . . the music began, the long shot of the grounds of the estate and the hind end of the yellow lab guided us toward . . . well, I’m not going to say anymore. No spoilers here. Suffice it to say, if you are a fan, be sure to watch next week.

As for our group, two hours later we watched in stunned silence as the credits rolled. DA was over. A distinct sound of rustling tissues filling the room; sniffs were sniffed; low murmurs were murmured, if that is a word.

The lights came up again. Foster called for our attention. Then he announced: “Ladies and Gentlemen, tea is now being served in . . .” wait for it . . . “the Library.”

Of course it was. Tiny sandwiches, tea cakes, pudding tarts. And yummy tea, poured into a colorful array of delicate porcelain teacups that had once belonged to Virginia’s . . . er, Mrs. Patmore’s mother, and had been rescued from a carton in a basement for this most fitting occasion.

The best part is, as with M.A.S.H, Cheers, and, of course, Seinfeld, I will always remember where I was for the Downton Abbey finale.