Sometimes you get to leave the island for an adventure, like to the Cape for a dentist appointment. Of course, you can make it more fun by adding stops at the Cape Cod Mall, the Christmas Tree Shop, Marshalls, or any number of chain stores and/or restaurants that aren’t on the Vineyard. Yay!

None of which can be accomplished without the help of the ferry and its tireless workers.

I stayed on the freight deck the other day, exhausted from my trip abroad. Parked in the back, the last car on the boat, I’d watched the workers in action. They have a system, or so ‘d like to believe, of knowing which vehicle to direct into which lane. (The big boat holds 60 cars, 76 with the hydraulic lift deck.) Trucks tend to go in the middle; SUVs front, rear, and center; VWs and Coopers in the narrow lanes on the sides where it’s tough to open the doors without banging them against the concrete walls. Loading the boat is a ballet of sorts, with each vehicle having its place, creating the right balance for a smooth voyage.

As I watched that day, the process reminded me of writing a novel. There are a whole lot of words of different sizes and colors, different horsepowers (or is it horses power?), different things the author wants to convey. The fact that I drive a VW might mean I prefer short, simple words (I do). Perhaps the BMW driver in the next lane uses more impressive words like prepandial or ubiety. (I have no idea what they mean.) 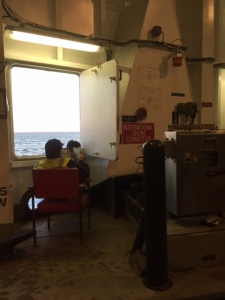 When all the vehicles were in their proper places, we were underway. I sat in my car, pondering the similarities between novelists and ferry workers, when I glanced to my left and saw this: One of the workers parked himself by the window, picked up a magazine, and took a well-deserved break. The sun was shining, the surf was gentle, and he, indeed, had the best seat in the house.

I knew the feeling. It’s how a novelist feels when he or she finishes another scene or a chapter, having choreographed a (hopefully) perfect dance of words. 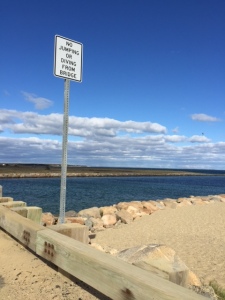 The sun was bright and warm for November, the water sparkled as if it were August. In the distance a fishing boat bobbed on the surf, a lone ferry chugged toward the Vineyard from the Cape. It was a spectacular, picturesque day, all blue and green and gold, the kind reserved for brochure photos that lure tourists into booking passage, rooms, and tables in restaurants. But, of course, I’m in this story, so there is a twist.

As I cruised along Beach Road on the stretch between Edgartown and Oak Bluffs (not another car in sight), I was mesmerized by the beauty and the peace and the serenity all around. I praised myself for having moved here; I’m sure that I was smiling. I almost reached the Jumping Bridge that most folks recognize from JAWS (cue the soundtrack) . . . when suddenly a blue flashing light lit up my rearview mirror.

“Was I speeding?” I asked the nice officer in the blue-and-gray outfit.

I was horrified. “I guess I was daydreaming. I was so distracted by the water . . .”

Well, there’s no need to elaborate. Suffice it to say I sat in shame while he called in my info. I hoped nothing vile showed up on my record if I have a record beyond the red light I ran back in Hadley when I was trying to rush home before my groceries defrosted.

And now, with hands folded, head hanging, I suddenly thought about a friend who once won the lottery. He was delirious until he learned that 14 others would share the jackpot, resulting in a much-diluted sum after taxes. He said, “The worst part is that was my only ‘first chance.’ I mean, who hits Megabucks more than once?”

Being stopped for speeding is hardly like winning the lottery, but it crossed my mind that this had been my only “first chance” at getting a moving violation on the island. I couldn’t believe I’d used it up after living here just two months.

The good news is that the nice policeman only gave me a warning. Perhaps he’d been mesmerized by the gorgeous day, too. Whatever the reason, I was grateful.

On the way home I obeyed the speed limit. And I stopped and bought a Megabucks ticket. 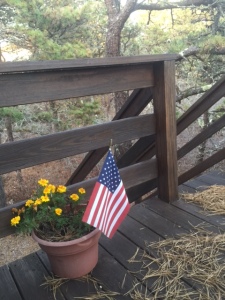 I sat down to write my blog today . . . a hopefully clever entry that might help readers smile at my adventures on this magical island. But in these past few days, there doesn’t seem to be a lot to smile about.

I feel so lucky to live on the Vineyard now. I also feel lucky that I have visited Paris; I have been captivated by its people and its places – by its own special magic. Today, like countless, countless people, I am very sad.

As I sat in my living room, looking out onto the deck, I knew I couldn’t post anything humorous . I thought about skipping an entry entirely. How could I be funny? And if I did, who the heck would want to read it? I sat and stared outside, trying to decide what I should do. Then I realized I was staring at this planter whose flowers should be past their expiration data now that summer is long over.

I don’t know who stuck the American flag into the planter. Maybe my landlord had wanted to kick off the season way back on Memorial Day. Or perhaps a summer renter had been celebrating the 4th of July.

Whatever the reason, in the middle of November, on this small hunk of land in the middle of the sea, I realized that even in the darkest times, we, as humans, stick together, fly our flags together, and are reminded to be grateful we are free.

There will be other times to smile, but not tonight, if that’s okay.

Something is wrong with me. On these glorious autumn days, I am hopelessly drawn to the beach…South Beach, Fuller Street Beach, Bend-In-the-Road Beach (you can probably figure out how each one got its name).

It’s not the sand or the tides or the end-of-summer warmth that has sucked me in: it’s the wampum.

There, I admit it. I walk along, head down, eyes rotating all around me, searching for perfect bits of purple and white, the hacked up remnants of once-lovely quahog shells than have been bludgeoned by ravenous scavenger sea gulls and left to linger on the shore. 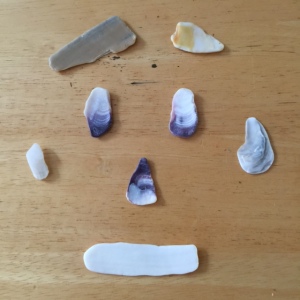 I have quite a collection now. I have also added poor-wampum-relations – sea glass (note the right ear in photo), oyster shells (left ear), and odd pieces of shells that have no form or real attraction other than that they’ve been polished as smooth as velvet by the waves (eyebrows, mouth).

So that’s my confession of the week: My wampum habit has been revealed. I have no idea what I am going to do with my buckets full of perfect specimens…other than to make these charming faces that have become my little friends.

I am having so much fun here, I guess it borders on ridiculous. Perhaps I should write a book instead. 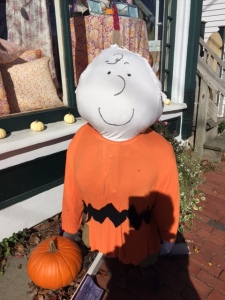 I’m back. I finally moved to Martha’s Vineyard . . . forever. Hooray! I’ve been asked why, as “a woman of a certain age,” I chose to sell, trash, or giveaway most of my possessions and move to the island. I think this photo says it all.

Okay, I know. It’s Charlie Brown. Anyone who’s on Facebook is no doubt sick to death of seeing kids and adults and cats and dogs in Halloween costumes, so, for this, I am sorry. But this Charlie isn’t like others you might have seen knocking at your door with a plastic bucket thrust out in search of Kit Kats. This Charlie Brown speaks to why I decided to make the Vineyard my new home.

As part of an annual fundraiser for Martha’s Vineyard Charter School, scarecrows have popped up all around the island. Not just ordinary scarecrows: they are recreations of favorite characters from children’s literature. (Literature! Books! Love it!!!) Charlie showed up on Main Street in Vineyard Haven. Another of my favorites is Jack and the Beanstalk, the 8-foot recreation that stands down by the Chappaquiddick Ferry. Harry Potter is, of course, popular, and I love a wonderful replica from Shel Silverstein’s The Giving Tree.

What a great place to live, where creativity is as fluid as the tides, and where inspiration appears on every street corner for young and old alike . . . and for folks “of a certain age,” which I like to think of as somewhere “in between.”

Stay tuned for my island adventures!