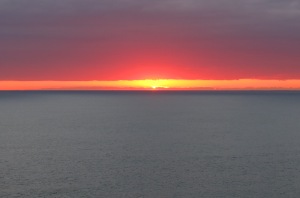 Last night I was coming home from the Cape on the 7:45 p.m. boat, the Governor—the small, open freight ferry. The sun was starting to set, the water was calm, the night cool but not cold as there was hardly a breeze. In short, it was a perfect crossing. Until . . .
Just before we entered Vineyard Haven Harbor, we stopped. Dead. Dead Calm, I thought, remembering an old horror film that I hadn’t been able to watch that was based on an even older book that I couldn’t read, what with my over-active imagination and terror of things that go bump in the night. Or, in this case, the sea. It probably didn’t help that the Fourth of July is approaching so yet another anniversary for the film, JAWS, is looming.
I didn’t know why we were sitting there what seemed like too long. (I do know I wanted no reminders that the boats had undergone their own brand of horror stories over the winter.) Rather than obsessing, I decided to study the coastline ahead, the curve of West Chop with its lighthouse that steadily blinked its welcome. It felt . . . peaceful. Not JAWS-like at all.
By then it was well past 8:00 p.m., and the orange sunset was fading into darkness. That’s when I noticed the lights. From West Chop to the harbor, lights appeared in countless windows of the waterfront homes—homes large and small, old and new, most gray-shingled and sitting high on the bluff, perhaps watching the water as I was watching them.
That’s when I knew that it really is summer again. Off season, most of those homes were dark, their windows boarded against winter’s nor’easters, their owners elsewhere, perhaps counting the weeks until they returned; off season, if I’d been on the Governor at that time of night, I’d be wrapped in a down coat and warm blanket to keep from freezing to death.
Yes, it is summer. The rhythm has changed; the island is alive again, vibrant with chattering voices and a palette of colors and the welcome sounds of music and laughter and the occasional bark of a black dog. And yes, with lights glowing in windows again. Through the bicycles and the mopeds and the long lines at restaurants, tranquility somehow remains, like the meadows up island, like the calm sea.
The Governor’s old engine finally rumbled back to life, like the rest of us who live here year-round, I supposed. Within only a few minutes, we glided into the harbor, pausing as one of the big ferries—the Martha’s Vineyard—passed. Up ahead, I saw another ferry docked in one of the two slips: apparently our delay had simply been to allow time for the Martha’s Vineyard to load up and leave.
It is summer, after all. Let the party begin!